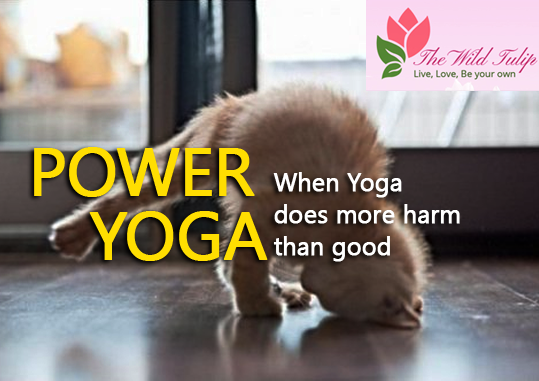 Before I begin, let me clarify that I am not anti-power-yoga, neither am I an ardent fan of power-yoga. I am neutral. What had compelled me to write this blog, in NOT power yoga per se, but the way it has been marketed and is being supplied, i.e taught in current times. Power Yoga, now is being promoted as ‘the thing’ by gyms to attract customers and power yoga classes are being conducted by non-certified and unqualified ‘trainers’, who in a bid to lure unassuming customers often use the term interchangeably with yoga.

Power Yoga has been popularized in recent times by celebrities and has attained immense popularity in a very short time. Practically every gym and fitness centre offers weekly power yoga classes to its members. And that’s their USP.

Power Yoga also known as Vinyasa is defined as “a powerful, energetic form of yoga where students fluidly move from one pose to the next in a traditional Ashtanga practice, in a faster rhythm while connecting their breathing to their movements. It many benefits include building internal heat, increased stamina, strength, and flexibility, as well as stress reduction.”

To me it as a “poor commercial derivative of Ashtanga yoga”, the emphasis being on the words ‘poor’ and ‘commercial’. It is a purely personal opinion.

Who can teach Power Yoga?

By definition it is clear enough that it is a superior and evolved form of the regular yoga. Power Yoga must be taught only by a ‘certified and trained instructor‘, and by certified I mean a recognized certification from a recognized institution, and not self-certified. Let me explain, one who has been doing power yoga for many years, may be adept at it himself/herself, and may also be able to guide others to do it. However, because of lack of formal training and certification, he may not know its impact on different people with respect to their underlying physiological conditions.

Let’s simplify this with a simple example-cum-analogy. Is a student who is in class five qualified enough to teach students of classes nursery, one, two, three and four, by virtue of being a student for longer than them and more experienced. Of course not. Similarly, does a student with an MBA degree, even if he is the topper of his batch, qualify to teach MBA students? Of course not.

The point is simple, to teach one needs to be trained. If one is trained and qualified, apart from fundamentals, he knows the process and will be able to guide in a way that is holistic and effective.

What happens when untrained instructors teach Power Yoga (or for that matter any form of workout)?

Injuries. The answer cannot be simpler. Sports injuries can be brutal and have far-reaching impact on our lives. Strained muscles, ligament tears, ruptures are common sports injuries that everyone is vulnerable to but an untrained instructor fails to recognize a sports injury proactively and has limited expertise in dealing with it.

Ashtanga Yoga is a very advanced form of yoga, requires some preparatory practice and expertise in basic yoga asanas.

Power yoga in gyms and fitness centres is a big sham and a scam.

Well, I am not against Power Yoga classes in gyms and fitness centers, but what concerns me is the structure and format of these classes. Static poses are very difficult and fast-paced for beginners and instructors play on this to establish the ‘power’ of power yoga, making people do asanas faster, without much focus on breathing and linking it with postures, just to keep them happy (happy enough to renew their gym membership!) giving them a false sense of deja vu. The flipside, as expected, is that they never attain the stamina that ashtanga yoga delivers.

Who can do Power Yoga?

Then there is this commonly prevalent idea that anyone and everyone can walk into a Vinyasa/Power yoga class and have a smooth sailing with maximum benefits. Gym instructors also encourage everyone to join the classes, making it sound as trivial as having a cupcake! The more the merrier. The truth sadly is far from this.

So who can do Power yoga? Practically anyone. However, Vinyasa is a progressive stage that must be attempted by someone who has preparatory experience of basic yoga and asanas and understands and has practiced controlled and aligned breathing. A person must take a beginners series or a workshop before he is actually ready to do power yoga. If no one has ever taken the time to actually learn the criticality of alignment and common misalignments of these rather challenging postures the students are set for disaster.

Imagine enrolling for a P.hD program without a Graduate degree! To top it imagine the credibility of the universities advertising for and promising you a P.hD degree irrespective of your academic standing!

Ashtanga Yoga is a brilliant form of movements that ensures physical and spiritual balance and well-being but works well only when the teacher and taught are aware of its nuances holistically.

So the next time you come across a gym advert promoting Power Yoga classes or consider walking into one such class randomly, take a moment to check the credentials of the trainer and also assess if you are ready to take it on.

P.S: Opinions expressed are personal and based on personal experience and survey.